Nine months of Taliban’s rule: 80.9% of the cabinet combination and governors are Pashtuns and 98.4% of them are Taliban members, there is no woman and Hazara 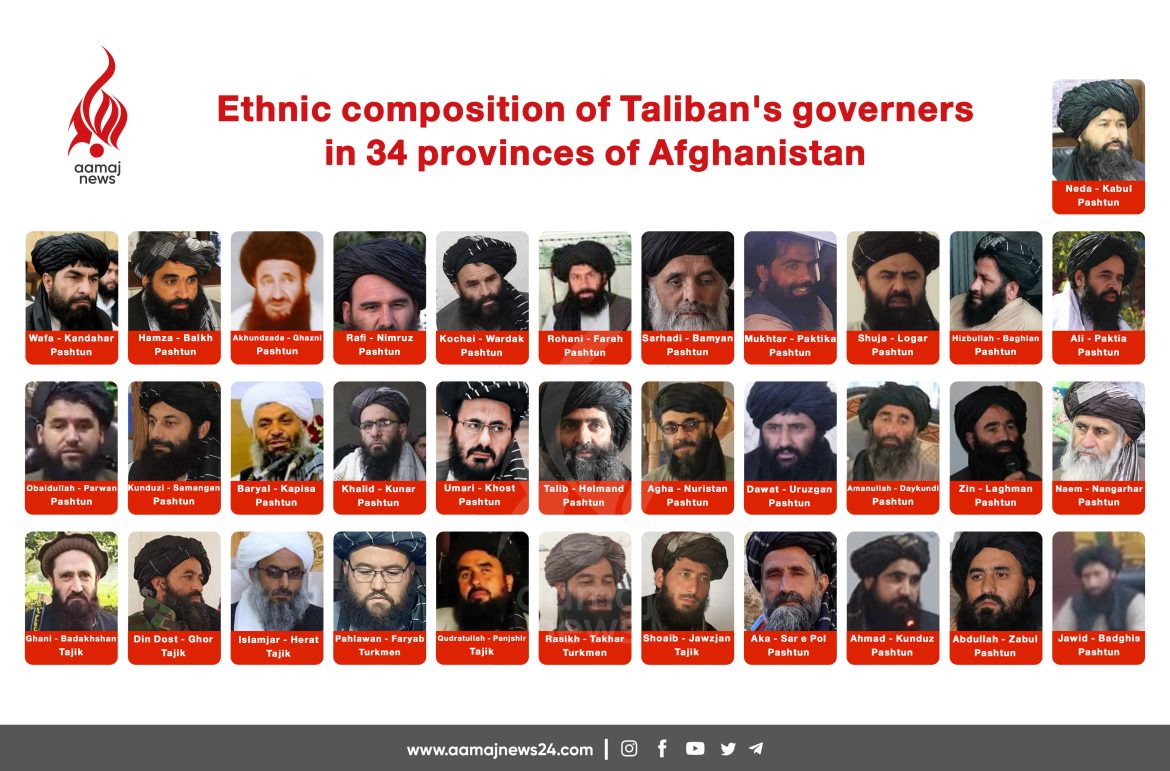 Some people support the Taliban goverment and some others oppose it, but international community has repeatedly urged the formation of an inclusive government.

From Afghanistan’s neighboring countries to European countries and the US have requested the formation of an inclusive government with presence of all ethnic groups representatives.

President of Turkey, Recep Tayyip Erdoğan, also stressed the importance of inclusivity, he added that Turkey will not take a part to run Kabul airport, without an inclusive government and participation of women in social activities.

But former prime minister of Pakistan, Imran Khan, who thought to be a powerful lobby of Taliban, in an interview had said that there is no alternative to Taliban, and the world must engage with them.

But Taliban consider their government an inclusive one.

How is the situation of people nine months since Taliban’s takeover?

The situation of people has become highly complicated. It is the first time in modern history that a nation lives in a country that has a government which lacks internal acceptancy and international recognition.

Nine months after Taliban’s domination, the level of hunger and poverty has increased unprecedentedly and the majority of people are struggling to find food to survive.

But nine months of Taliban’s domination means that their examination time has reached its end?

After escaping of Ashraf Ghani, Taliban took the power and promised to the world that they have changed and will treat all Afghans in a fair way and form an inclusive government. But the world focused on human rights issues, the rights of women in particular girls for work and education, that the Taliban had promised to observe the issues, and allow girls to go to school by start of the new education year.

In return the Taliban just wanted to be recognized and supported financially.

But it has been nine months of Taliban’s domination yet they have not formed an inclusive government, and additionally have not kept up their promises regarding women’s rights. The new education year has started already, but thousands of girls above grade sixth cannot go to school. Everyday torturing, killing, and depriving of people by the Taliban make headlines worldwide.

In recent weeks the massacre of civilians in Panjshir, Baghlan and Takhar by Taliban, and their military campaign have provoked internal and international reactions. Public figures and international organizations have accused the Taliban of commiting war crime in that provinces.

The National Resistance Front of Afghanistan (NRF) has claimed that dozens of Taliban fighters including their commanders have been killed in conflicts in Panjshir, Andarab in Baghlan and Takhar province. But the Taliban who rejected the conflicts firstly, do not comment on that issue now.

People in the know and experts believe that the examination time of Taliban is over and they have failed.

But what would the world do?

Western countries say that they are monitoring the Taliban, they are not satisfied with the Taliban’s treatment with the people of Afghanistan. As recently parliament of France has urged president of that country to sanction the Taliban, because they say the Taliban have not kept up their promises.

But analysts say that the US holds the exam paper of Taliban, this country can give a score according to that Taliban pass or fail the exam.

On the other hand, the Taliban’s alter ego, Imran Khan, known as Taliban Khan has been ousted from power. Khan played a key rule to support the Taliban, but he is no longer in power. Now Taliban are in close contact with the US two big opponents– Russia and China– so that recently Moscow accepted Taliban’s diplomat and delivered a part of the embassy.

In these nine months, a sad deadlock has taken over people’s lives. On the one hand, women who want to preserve the achievements of the past two decades and young people who are thinking to flee the country. On the other hand, rulers who think that they have been able to take over the government by force there is no need for people’s satisfaction.

Plus, the media and journalists are considered a serious internal challenge, and any journalist who disagrees with the Taliban is viewed with hostility.

But the main questions are whether the Taliban are moving in the right direction?

Will the challenge of hunger of people bring the Taliban to their knees? And is the Taliban examination time over?

These are questions that will be answered by passage of time.

Former prime minister of Pakistan says his life in danger