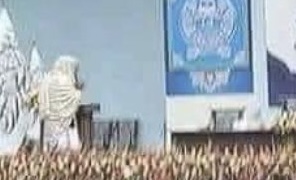 The Taliban supreme leader, Hibatullah Akhundzada, in his message on the arrival of the Eid-ul-Adha said that this year people are celebrating the Eid in such a way that Afghanistan has been completely freed, and the entire nation is living in peace and brotherhood.

“This victory is not only belonging to the Islamic Emirate and the Mujhideen, rather it belongs to the entire Afghan nation that during the past 20-year of Jihad, they suffered all kinds of hardships till our country was freed of invasion,”Akhundzada said. “I call on all directions that we do not want enmity with anyone, our arms are open to our countrymen. Our friendship and enmity are based on the principles of Islam.”

He added that Taliban are trying for ensuring the security, development and construction, despite strengthening the Islamic system.

“We assure our neighbors, the region and the world that we will not allow anyone to use our territory to threaten the security of other countries. We also want other countries not to interfere in our internal affairs,” Akhundzada reiterated.

The news comes as yesterday around 4:30 p.m. a rocket attack took place from Hairatan border in Afghanistan on Termez city, Uzbekistan.

“Within the framework of mutual interaction and commitment, we want good, diplomatic, economic and political relations with the world, including the United States, and we consider this in the interest of all sides,” supreme leader of Taliban said.

Akhundzada also referring to return of some figures said, “as Afghans are returning from abroad to their homeland, I instruct the liaison commission to fulfill all the promises made to them and ensure their safety and security.”

The message added that the Taliban pay attention to education, with special emphasize on religious as well as modern studies for children, but it has not said anything regarding the reopening of schools for girls above grade sixth.

The Taliban regime is the most repressive regime in the world: The US envoy