The start of war season; where are powerful men of north and what are they doing? 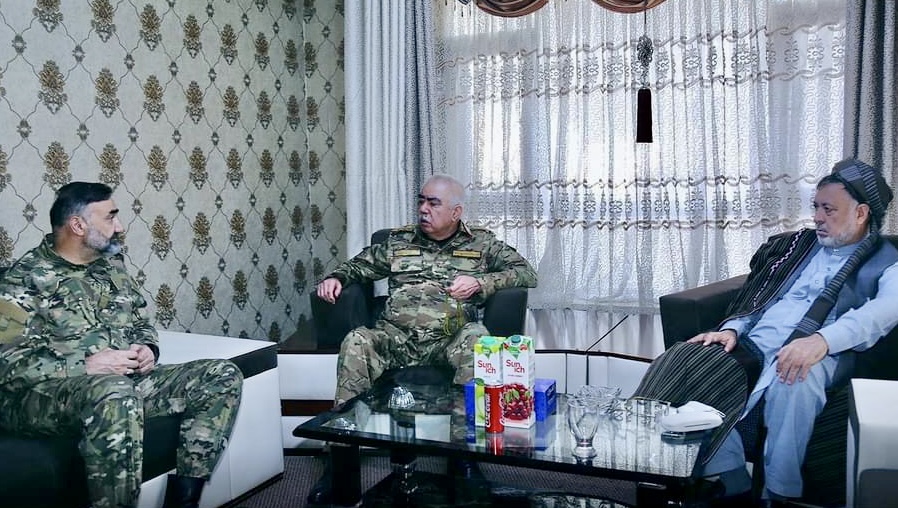 It has been eight months that Taliban assumed the power in Afghanistan. The republic collapsed as Ashraf Ghani fled the country, and prominent figures as well as politicians scattered all over the world. But from the beginning of the fall of former government until now, a story has been repeated that the war against the Taliban in Afghanistan will restart with the coming of spring.

Guerrilla war in Panjshir and Andarab has turned out to be problematic for Taliban, and even they have resorted to carrying their fighters via helicopter. But a lot of people are asking about the traditional anti-Taliban foothold and its leading figures who are known as “powerful men of north”, where are they, and what are they doing?

Marshal Abdul Rashid Dostum, Ata Mohammad Noor and Mohammad Mohaqiq are the “powerful men” who have played a key role in political developments of Afghanistan in particular in north in past few decades.

Where is Marshal Dostum, and what are his plans?

Ankara–based Marshal Dostum apparently has not said anything about his plans and not showed his readiness to play his role, because of Turkey’s close relationship with the Taliban and presence of Uzbek Taliban in north part Afghanistan.

Marshal Dostum’s spokesman, Ihsan Niroo, told Aamaj News that they will start military operation if failed to reach a political agreement with the Taliban. But it seems that Taliban are not ready to engage especially with Marshal Dostum, because they have bad memories of “Dasht-i-Leili”.

But sources close to Marshal Dostum, who refused to be named, said it seems to be difficult for Dostum to play his role against the Taliban, especially from a military point of view.

Traditional supporters of Marshal and the Turkic countries are no longer ready to support him. Turkey has established close ties with the Taliban and nearly wants to recognize them, and Uzbekistan has promised to have friendly relations with the Taliban.

The sources say that the war without military and financial support is difficult. On the other hand, those who supported Marshal can not do anything for him because they are afraid of Taliban, so wait and see whether Marshal Dostum chooses to live in isolation, or there will be another option to choose.

But another source close to Marshal Dostum told Aamaj News that every day, he spends several hours in his beautiful flower house in Ankara, and occasionally meet some political figures there. The source added that Mr. Dostum intends to form a military group for starting war against the Taliban if they do not accept his demands politically.

The source added that Marshal Dostum is seeking to establish a group of Uzbek immigrant fighters in Iran. But a source with the knowledge in this field from Iran told Aamaj News that such a thing is not true, and Iran does not allow at all, because this country is not looking for enmity with the Taliban.

Where is Ata Mohammad Noor and what is he doing?

Ata Mohammad Noor, a well-known politician in north of Afghanistan who was called as the “emperor of the north” before the Taliban domination, is based in the United Arab Emirates.

Sources close to Ata Mohammad Noor said that he meets with political figures in different countries every day, and day-to-day ha realizes that a political engagement with the Taliban is not possible and must think about finding alternative ways.

The sources added although restrictions on political activity outside Afghanistan remain in place and even the countries which supported the resistance against the Taliban under Ahmad Shah Massoud, are not ready to support him. But Mr. Noor is organizing guerrilla groups across Afghanistan.

The sources reiterated that Mr. Noor has equipped the guerrillas of the Supreme Council of Resistance with his personal facilities in Sar-e-Pul, Samangan, Parwan, Baghlan, Kabul, Faryab, Kunduz, Jowzjan, Balkh, Bamyan, Ghor, Badghis and Panjshir provinces, and this process will continue across Afghanistan.

Where is Mohammad Mohaqiq and what is he doing?

Relatives of Mohaqiq said that he commutes between Iran and Turkey, and currently he is not involved in any anti-Taliban activities and observing the situation carefully. The sources added that Mohaqiq does not want to face any problems due to Turkey and Iran’s close ties with Taliban.

Mohaqiq himself told Aamaj News that he has no plan to fight against Taliban right now. “Right now I am going to talk, not to fight,” Mohaqiq said.

Overall, the people close to these politicians said that they will not remain silent and will resort to any means to reach their goals.

Marshal Dostum’s spokesman, Ihsan Niroo, in an interview with Aamaj News said that they do not want to gain access in some goverment positions in Taliban’s goverment. He emphasized that they are looking for the formation of an inclusive government, and want to reach their goals through diplomacy in the first place. Mr. Niroo added that they are ready both in the field of politics and battlefield adding that Taliban’s bad behavior and extremism are still going on in Afghanistan.

Mr. Niroo said that unqualified appointees and lack of ethnic balance show that Taliban’s government has a lot of problems.

“Firstly, I hope we should not be dragged into war, if we go to war. Then our professional men know where and how to start the war. Whoever is on the right side, the people would support. The world would support as well and will have a positive consequence as well,” he added.

This time the Taliban have more influence in the north than their first rule, especially among Uzbek ethnic group which has made the situation a little bit difficult for political figures in north.

On the contrary, Mr. Niroo believes that Taliban are weaker than their first rule and their influence on Uzbeks has not added to their power.

“We think the Taliban are weaker than their first rule. The reason is crystal clear that in their first rule the leaders as Osama bin Laden, Mullah Omar and other influential figures were leading and supporting this group. But the leadership of the Taliban today do not have enough experience. The way they won, everyone knows, is linked to a big conspiracy,” Niroo added.

Another source close to Ata Mohammad Noor believes that non-recognition of Taliban is the result of these politicians’ activities, in particular of Mr. Noor. He emphasized that although Mr. Noor is not in Afghanistan, but he supports civil activities and civil activists inside Afghanistan.

The source referring to the countries’ lack of support of Mr Noor’s political activities said that war is not that easy and costs a lot. Therefore, war in Afghanistan is not possible without the support of a foreign power, and Mr. Noor does not want to have a destructive war with Taliban.

But Mr. Ihsan Niroo considers the motivation to fight to be the most important factor in the fight against the Taliban.

“When you have the motivation to fight, you do not care about the support of others. Today, the non-recognition of Taliban by the world means that they are not satisfied with Taliban. In past seven months we were in touch with lots of countries and the majority of them expressed their concern over assuming power by a little group in Afghanistan,” Mr. Niroo added.

A person close to Mohammad Mohaqiq said that death is better than living in isolation, and in the near future the world would change its opinion towards Taliban and this way the way for activities of Mr. Mohaqiq inside the country would be opened.

Hamidullah Sarwari, a person who has majored in politics in Turkey, believes that powerful political figures from the north are taking their last test in history. He said if this time these political leaders fail to do anything against the Taliban, the history will judge them as political leaders who had actually no power. At the same time, Mr. Sarwari emphasized that these political leaders have close relations with the regional powers and can not lead any struggle without the support of a foreign power.

Finally, it seems that the Taliban are not ready to engage with these political figures and consider themselves the conquerors. But whether the “powerful figures of the north” can do anything or not, the people should wait and see.