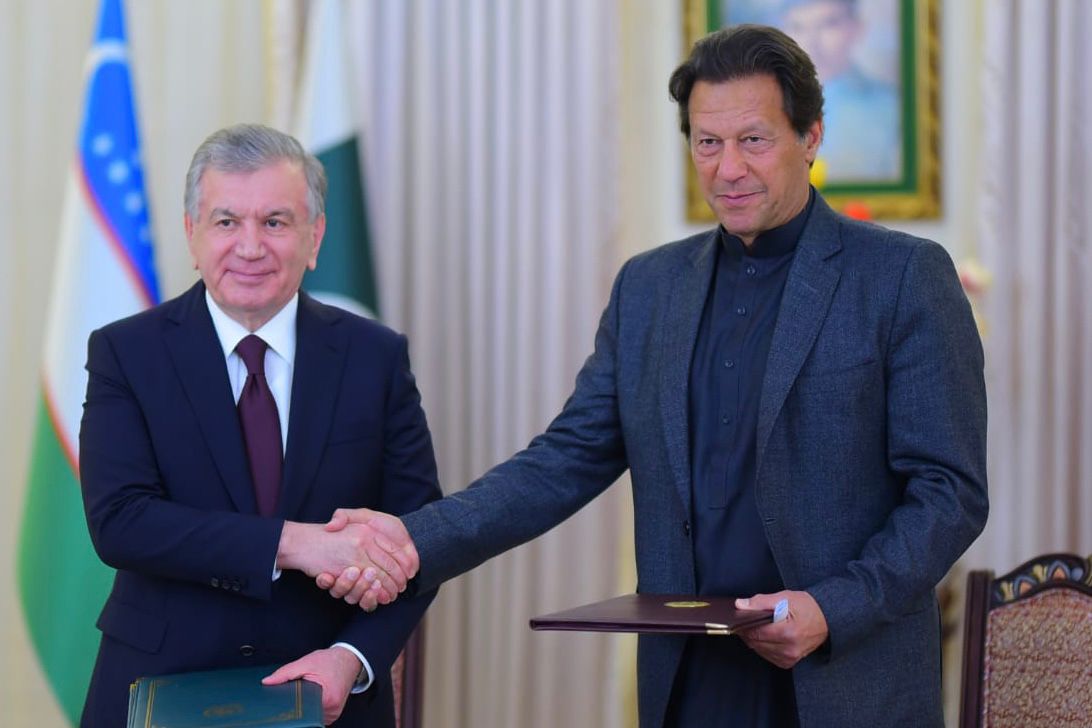 Yesterday, prime minister of Pakistan, Imran Khan, in a meeting with president of Uzbekistan, Shavkat Mirziyoyev, said that Pakistan and Uzbekistan together will lobby to unfreeze Afghan assets.

Imran khan added that the two countries would also meet with Taliban to see what conditions are required for recognition from the international community and remarked, “what Afghanistan can do to gain international recognition: we have decided to do this campaign together.”

After Taliban’s domination, the US froze approximately $10 billion of Afghan assets.

Earlier the US president, Joe Biden, issued an executive order that $3.5 billion of the assets would be paid for victims of September 11, which elicited a wide range of reactions around the world.

But the White House spokesperson said that no money would be transferred without the court order.

The Termez-Mazar-e-Sharif-Kabul-Peshawar railway project plays an important role for the future of the region: President of Uzbekistan

Does the political honeymoon of Taliban’s Uzbek commanders known as ‘conquerors of north’ reach its end?

What are the effects of the West’s sanctions against...

18% of families have sent children out to work:...

Saleh: The CEO of Maiwand Bank is in custody,...

I liked as much as you will receive performed right here. The comic strip is tasteful, your authored subject matter stylish. however, you command get got an nervousness over that you would like be handing over the following. sick for sure come more formerly once more since precisely the same nearly a lot continuously inside case you shield this hike.

You should take part in a contest for one of the best blogs on the web. I will recommend this site!

You must participate in a contest for probably the greatest blogs on the web. I’ll advocate this site!

I actually wanted to jot down a quick remark to appreciate you for some of the unique tips and hints you are writing on this site. My particularly long internet research has at the end of the day been recognized with high-quality strategies to talk about with my great friends. I would believe that most of us visitors actually are undoubtedly fortunate to be in a very good network with very many awesome individuals with great advice. I feel somewhat happy to have encountered your website page and look forward to tons of more enjoyable minutes reading here. Thanks once again for a lot of things.

hello!,I like your writing very so much! percentage we keep up a correspondence extra about your article on AOL? I need a specialist on this area to solve my problem. May be that’s you! Looking ahead to see you.

I am just writing to make you understand of the beneficial encounter my child found going through your site. She realized a lot of issues, which included how it is like to have a very effective coaching nature to let others just know specified problematic subject areas. You truly did more than people’s expectations. Thank you for displaying these warm and helpful, dependable, explanatory not to mention unique tips on your topic to Ethel.

Thanks for some other wonderful post. Where else may anyone get that type of information in such a perfect means of writing? I’ve a presentation subsequent week, and I’m at the search for such information.

Thank you so much for providing individuals with an exceptionally spectacular opportunity to read from this site. It really is very good and as well , packed with a good time for me and my office mates to visit your website at the least three times weekly to read the latest guidance you have. And of course, I’m so certainly contented concerning the beautiful thoughts you serve. Some 4 ideas on this page are clearly the most suitable I’ve had.

Nice post. I be taught one thing more challenging on completely different blogs everyday. It would all the time be stimulating to read content material from different writers and observe just a little something from their store. I’d choose to use some with the content material on my blog whether you don’t mind. Natually I’ll offer you a hyperlink on your web blog. Thanks for sharing.

It’s really a nice and helpful piece of information. I am happy that you simply shared this helpful info with us. Please keep us informed like this. Thanks for sharing.

Dead written subject matter, thank you for information. “You can do very little with faith, but you can do nothing without it.” by Samuel Butler.

I savor, cause I found just what I was looking for. You’ve ended my four day long hunt! God Bless you man. Have a nice day. Bye

This is the right blog for anyone who wants to find out about this topic. You realize so much its almost hard to argue with you (not that I actually would want…HaHa). You definitely put a new spin on a topic thats been written about for years. Great stuff, just great!

I rattling happy to find this internet site on bing, just what I was looking for : D as well saved to fav.

Good day I am so glad I found your website, I really found you by mistake, while I was browsing on Google for something else, Regardless I am here now and would just like to say thanks a lot for a incredible post and a all round entertaining blog (I also love the theme/design), I don’t have time to look over it all at the minute but I have saved it and also added your RSS feeds, so when I have time I will be back to read much more, Please do keep up the excellent job.

But wanna comment that you have a very nice web site, I enjoy the style it really stands out.