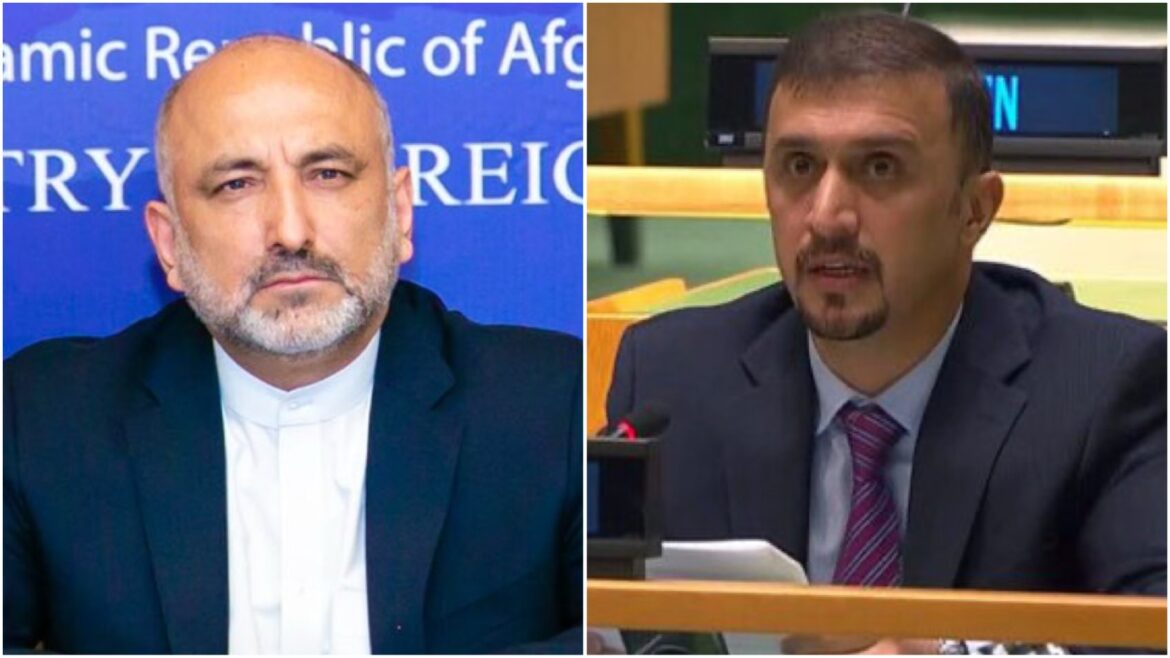 Charge d’Affaires of Afghansitan Permanent Mission to the UN, Naseer Ahmad Faiq, says that Atmar is conspiring against him, because he criticized former government officials.

Mr. Haneef Atmar in his letter to the UN Secretary General, Antonio Guterres, called himself “foreign minister of the Islamic republic of Afghanistan.” But Mr. Faiq says he has been appointed by agreement of Ghulam Mohammad Isaczai.

On December 15, 2021 Naseer Ahmad Faiq officially assumed the leadership of the Mission in capacity of Charge d’Affaires. Now he says Mr. Atmar’s letter to the UN Secretary General is “against the law” and a fake stamp has been used in the letter, too.

He adds that with the fall of the previous Afghan government, Haneef Atmar is no longer the foreign minister and does not have the authority to nominate a caretaker for Afghanistan.

“According to the UN protocol, Mr. Gholam Mohammad Ishaqozi, a former envoy authorized by the United Nations, introduced me to the UN after his resignation,” Faiq said. “Mr. Atmar is not credible before the United Nations and therefore does not have the authority to nominate a caretaker.”

He adds that Wali Naeemi resigned simultaneously with Mr. Ishaqzai, and over the past few months he has not returned to his work as well.

At that meeting Faiq addressing the members of UNSC said that he was representing people of Afghanistan, neither government of Ashraf Ghani nor Taliban.

He criticizing former runaway president of Afghanistan, Ashraf Ghani Ahmadzai, called on the UNSC for freezing and confiscation of Afghansitan’s assets illegally transferred to accounts of the former corrupt government officials, and called for holding them accountable.

They called Mohammad Haneef Atmar’s letter as an “unjustified, unprincipled and without administrative grounds.”

Asila Wardak, a member of the Independent Human Rights Commission of the Organization of Islamic Cooperation (OIC), sharing the statement of “former government foreign ministry chiefs” supported Mr. Faiq to continue his role as caretaker and taking a stand against corruption cases by former Afghan officials.

Rahmatullah Nabil, the former head of national security, in a tweet expressed his support for Nasir Ahmad Faiq, saying that “the majority of the Afghan people will support you and your patriotic stance against the (traitorous minority).”