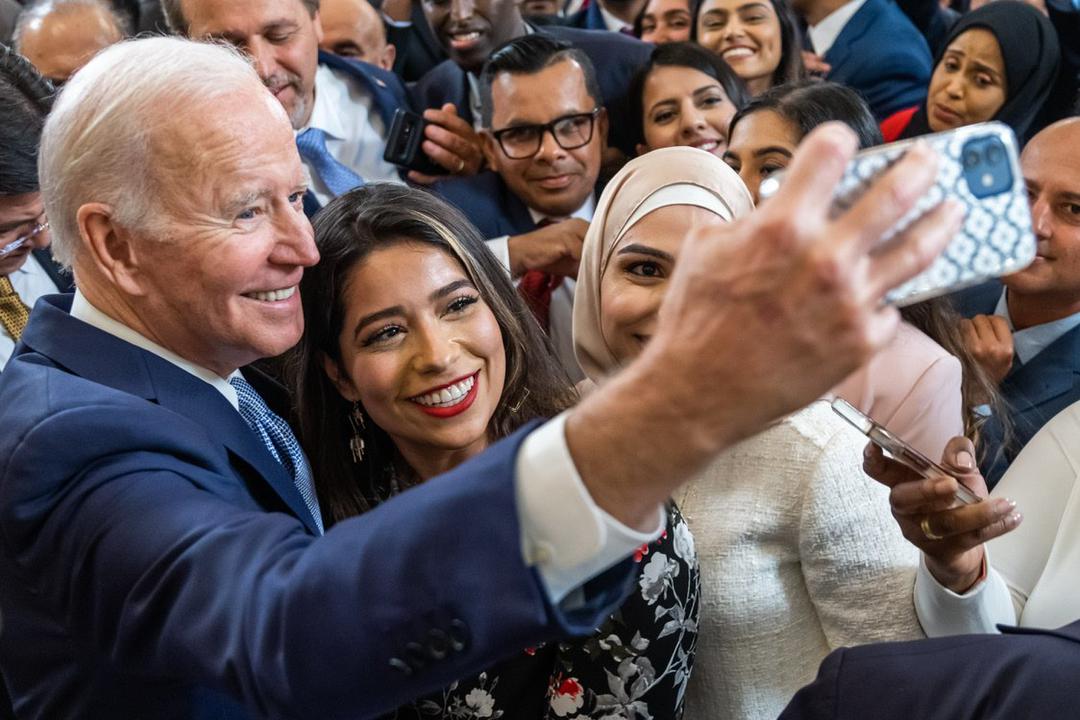 The U.S. president, Joe Biden, welcomed a number of Muslims to the White House.

Eid-al-Fitr has been celebrated at White House since the presidency of Bill Clinton back in 1990s, but trump’s predecessor had cancelled all such occasions and Biden restored them.

Hundreds of people participated, and president Biden said he had promised as a presidential candidate to bring back marking Eid al-Fitr at the White House, but was forced to hold a virtual celebration last year because of the coronavirus pandemic.

“Today, around the world, we’ve seen so many Muslims that have been targeted by violence. No one, no one should discriminate against or be oppressed, or be repressed, for their religious beliefs,” Biden said.

President Biden said that Muslims make Americans stronger every single day, even as they still face real challenges and threats in that country, including targeted violence and Islamophobia.

Eid-al-Fitr has been celebrated in White House for years, but Trump had cancelled these types of celebrations and just issued statements on such issues.

Unlike the Taliban, today people celebrate Eid-al-Fitr in Panjshir

A journalist of Al Jazeera shot dead by Israeli...

Keep up the wonderful work, I read few posts on this site and I think that your web blog is rattling interesting and has got lots of wonderful information.

As soon as I found this internet site I went on reddit to share some of the love with them.

Greetings from Ohio! I’m bored to tears at work so I decided to browse your site on my iphone during lunch break. I love the info you provide here and can’t wait to take a look when I get home. I’m amazed at how fast your blog loaded on my phone .. I’m not even using WIFI, just 3G .. Anyhow, excellent site!

Have you ever considered publishing an ebook or guest authoring on other sites? I have a blog based upon on the same topics you discuss and would really like to have you share some stories/information. I know my visitors would value your work. If you are even remotely interested, feel free to send me an e-mail.

I have read some good stuff here. Definitely value bookmarking for revisiting. I wonder how much effort you put to make such a fantastic informative web site.

Well I sincerely enjoyed studying it. This article procured by you is very helpful for proper planning.

I love your blog.. very nice colors & theme. Did you create this website yourself? Plz reply back as I’m looking to create my own blog and would like to know wheere u got this from. thanks

I have been examinating out some of your stories and i can state clever stuff. I will definitely bookmark your website.

Greetings! Very helpful advice on this article! It is the little changes that make the biggest changes. Thanks a lot for sharing!

Keep up the superb work, I read few articles on this internet site and I think that your site is real interesting and has got bands of wonderful information.

Having read this I thought it was very informative. I appreciate you taking the time and effort to put this article together. I once again find myself spending way to much time both reading and commenting. But so what, it was still worth it!

I have to get across my love for your generosity supporting persons who should have assistance with this important situation. Your special dedication to getting the message around had been rather useful and have continuously empowered guys just like me to arrive at their ambitions. Your new interesting facts entails a great deal a person like me and even further to my mates. Thank you; from everyone of us.

I like the valuable information you provide in your articles. I will bookmark your weblog and check again here frequently. I am quite certain I’ll learn many new stuff right here! Best of luck for the next!

You have remarked very interesting points! ps nice internet site. “Wisdom is the supreme part of happiness.” by Sophocles.

Hello, Neat post. There’s a problem together with your web site in web explorer, could check this?K IE nonetheless is the market leader and a large section of other folks will leave out your great writing because of this problem.

Thank you for your entire work on this website. Ellie take interest in working on research and it is simple to grasp why. I learn all concerning the compelling ways you render powerful items by means of the website and foster contribution from website visitors on this subject then our own girl is in fact being taught a great deal. Take pleasure in the remaining portion of the year. You are always performing a wonderful job.

I was reading through some of your articles on this website and I conceive this site is very instructive! Continue putting up.

Some genuinely good information, Gladiolus I observed this.

I really like your writing style, excellent info, appreciate it for posting :D. “In university they don’t tell you that the greater part of the law is learning to tolerate fools.” by Doris Lessing.

of course like your web-site but you need to check the spelling on quite a few of your posts. A number of them are rife with spelling problems and I to find it very bothersome to tell the reality however I will certainly come back again.

I am impressed with this site, real I am a fan.

You could definitely see your skills within the paintings you write. The world hopes for even more passionate writers like you who are not afraid to mention how they believe. All the time go after your heart. “History is the version of past events that people have decided to agree upon.” by Napoleon.